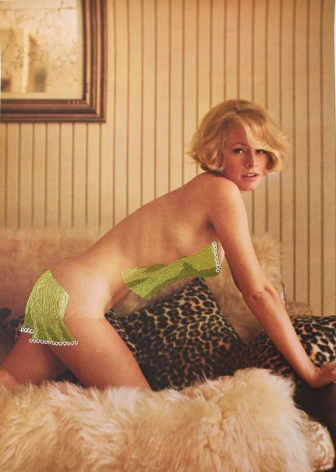 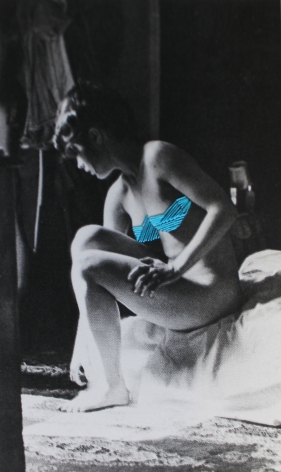 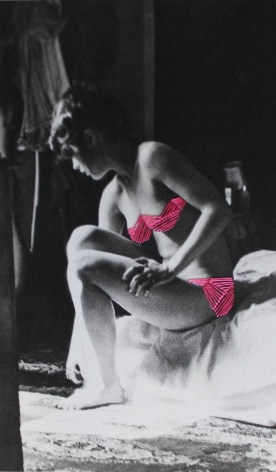 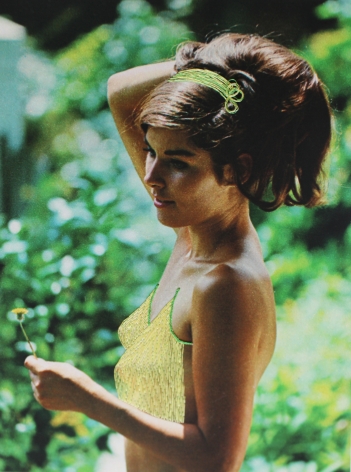 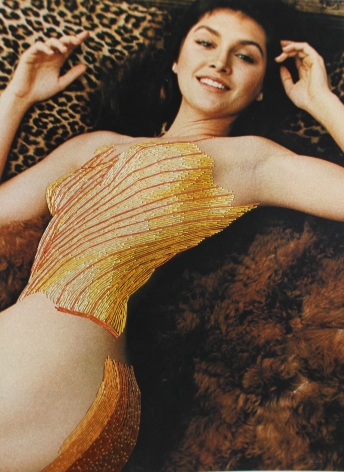 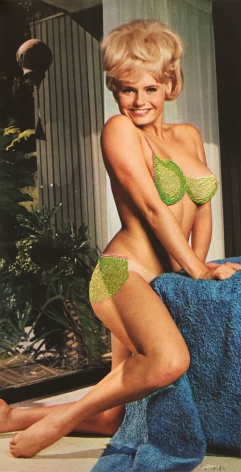 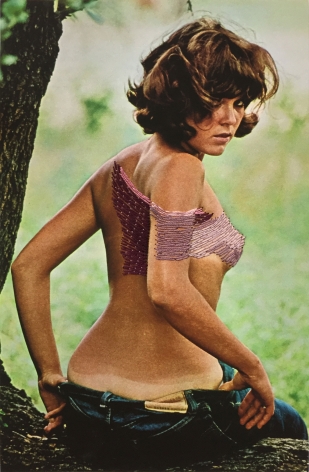 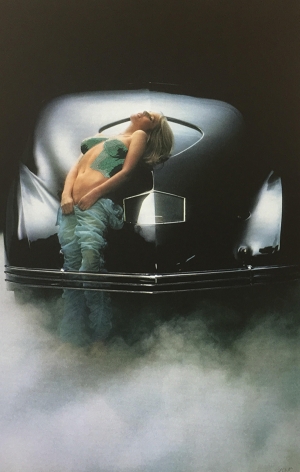 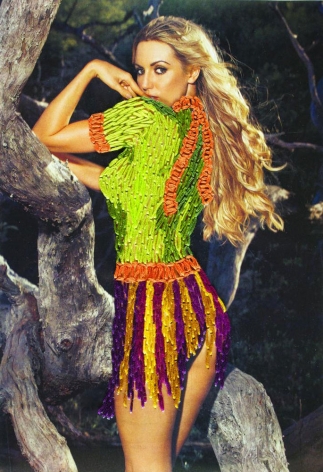 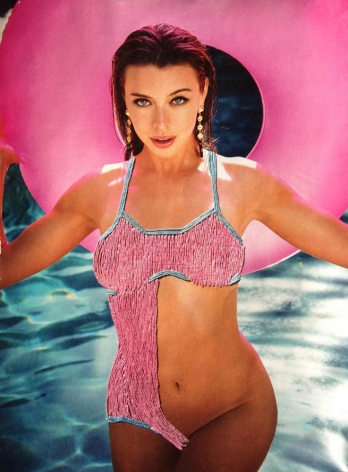 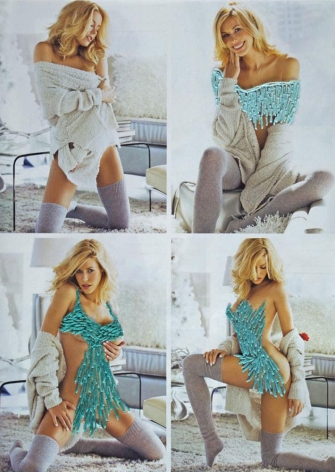 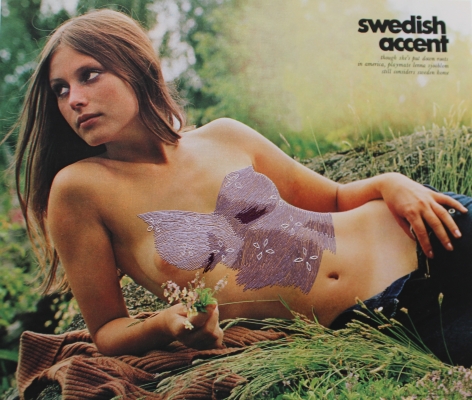 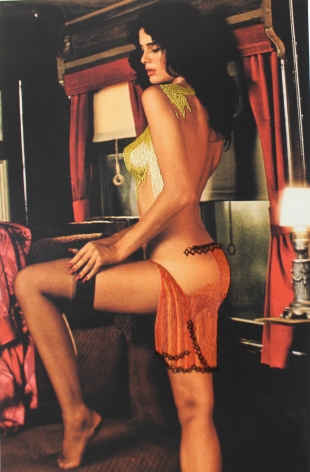 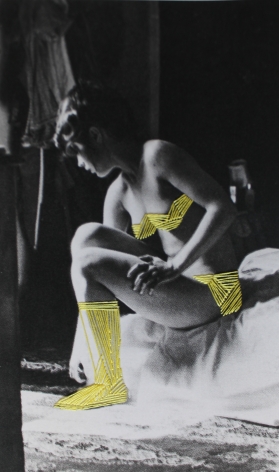 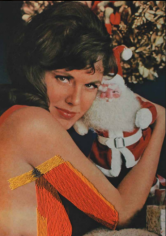 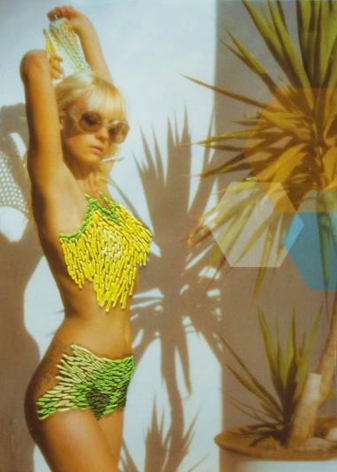 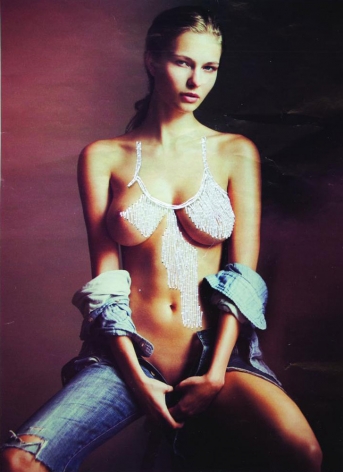 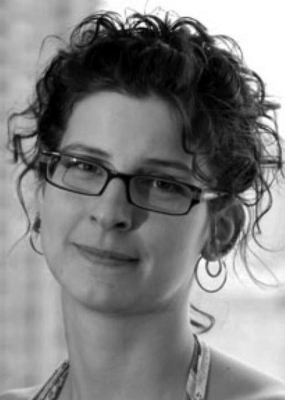 The work of Saskia van Kampen can be found at the intersection of design and craft. Using a combination of diverse disciplines, including drawing, painting, engraving, and typography, Saskia van Kampen stands out with her embroidery and sewing techniques that she ironically uses to denounce and trouble the representation of women in society. By transforming the materials that support the contemporary notions of a woman’s identity, the pieces of van Kampen critic the role played by the media in defining the public and private roles of women.

The art of sewing and embroidery has been, since the Victorian era, largely associated with femininity and domesticity. This work is considered to be thorough, a symbol of docility, while it’s being done in silence, eyes down, like a revealing element of a woman’s capacity to fulfill her role as a wife. In her series Virgin |Whore, Saskia van Kampen uses embroidery on the famous center pages of Playboy magazine dating from the years of the 1960s and 1970s, hoping to reverse the status of an object linked to these models. With the help of a needle and thread, she covers (or dresses) parts of the models that are photographed in a suggestive manner whether it is at the beach, in a car or a pool. Ironically, the objectification of these women and of the embroidery is, in these artworks, equally oppressive as repressible.

In this series, the technique of embroidery is combined with an unexpected image and unconventional support. Embroidery is usually done on cotton where the wounds of the fabric will reconnect after the needle has passed through them. The artist uses this technique on paper, a medium that is obviously much more difficult to use than fabric and that will keep the trace of the needle, weakening the resistance of the support in the medium. There are many levels of comprehension that exist in the artworks of Saskia van Kampen, each of them supporting the claim of the artist. While a feminist intelligence can be found in the needlework itself, there is also an evocation of the stereotype of a virgin in opposition with the one of a whore. Saskia Van Kampen condemns, in this series of the same name, the roles that are dictated and imposed by society in the form and the technique that she uses. The rich dichotomy between the technique and ideology is evident in her artworks. However, the vibrant colors and the playful interaction between the artistry and the technique in the artworks reveal a darker dimension.

Originally from Toronto, Saskia van Kampen received an education in graphic design. Her artworks have been presented in many exhibitions around Canada. In 2013, Saskia van Kampen was awarded the Joseph-Armand Bombardier Canada Graduate Scholarship for her Master's research through SSHRC. Her personal design projects focus on the intersection of design and craft and involve cross-pollination between various disciplines including painting, printmaking, typography, and sewing.

One encounters, hopefully, such teachers at least once in one’s life: the knowledgeable, enthusiastic one whose passion for a subject is pleasantly apparent even in his or her demeanor; one you want to chat with over bottomless cups of coffee. Saskia van Kampen, though I’ve not audited her design classes at OCAD U, must be one such teacher. It was difficult to remain on my course as an interviewer with Saskia for the eagerness with which she speaks about her fields made me want to forget my questions and to talk and talk on and on as though we were old friends. 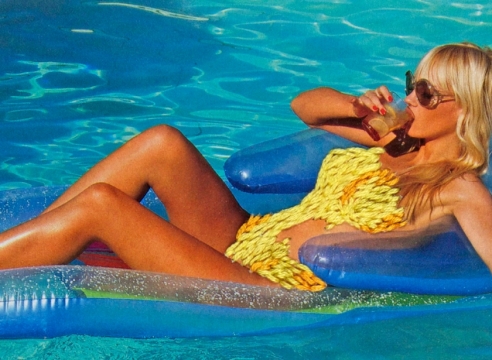