Besner’s creative work is based on a mixed technique on canvas. He has a preference for oil sticks and their rich palette of colours as well as acrylic paint, structural mortar, china marker and aerosol paint. In addition to these materials, he uses a technique of application by the fingers and scraping of the canvas.

Besner was born in 1965 in North Lancaster, Ontario. He completed his Bachelor of Architecture at the University of Montreal in 1992. This early education allowed him to focus his thoughts on the nature of the city and its components.

The artist is entirely open to the vibrations of contemporary society which he seeks to remodel in new forms of plasticity, hovering somewhere between the figurative and the abstract. His aim is not to create an ideal or to reproduce nature, but rather to give form to the energy emanating from the metaphysics of human activity.

The fantastic creations to which he gives birth on the canvas are a synonym of human fragility, of the brevity of life, by which he is both awed and troubled. Besner draws on the energy from the heart of the city, with its noise and fast-paced activity, which he then modulates in his painting. The characters depicted are necessarily imbued with the same sense of dizzying movement associated with urban press. They live in the echoes and the ambience of the city, which the artist depicts using colours, lines and motifs.

Whether his subject is human, animal or architectural, the resulting depiction is always the effect of a plasticity that emerges from the dynamic relation between the figure and the space. When the subject is a person, everything is in his gaze, his mouth, his high cheekbones, broad forehead and sometimes merely in the slight angle at which the head is held. The overall facial expression is more than just a reflection of personality; it is a reflection of our contemporary world, which belongs to all of us. Postures, hairstyles, body language ― all mirror the movement initiated by the face and express the full eloquence of the work.

The emotional structure of Besner’s work expresses a renewed, richer and deeper view of life, based on line and colour. The resulting depiction is the image of a world in itself, which largely transcends the two dimensional limits of the canvas. 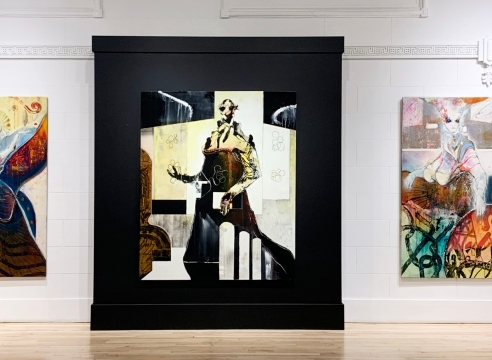